Micron Technology (MU 0.83%) is one of the world’s largest producers of DRAM and NAND memory chips. It’s the third-largest DRAM manufacturer after Samsung and SK Hynix, according to IC Insights, while Trendforce ranks it as the fifth-largest producer of NAND chips.

Unlike more broadly diversified companies like Samsung and Western Digital, which only generate a portion of their revenues from memory chips, Micron is a “pure play” on the memory market.

In its latest quarter, it generated 73% of its revenue from DRAM chips, 26% from NAND chips, and the remaining sliver from other types of memory. SK Hynix is also a pure-play memory chipmaker like Micron, but it’s difficult for American investors to directly buy shares of the South Korean company. 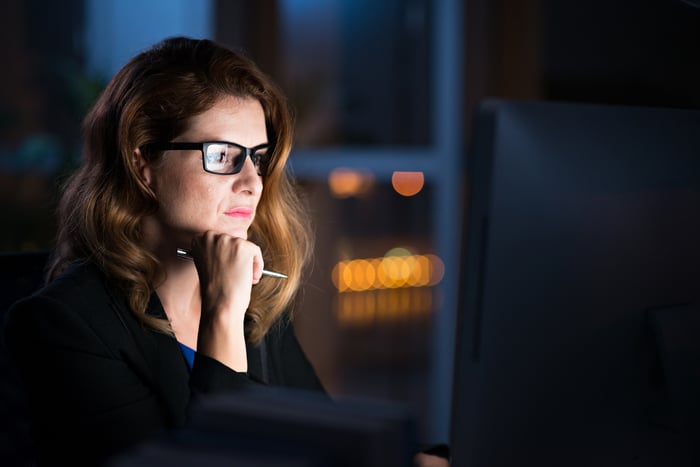 Micron’s direct exposure to the cyclical memory market is a double-edged sword. It usually generates robust growth as memory prices rise, but it tends to underperform its semiconductor peers when those prices decline.

Nevertheless, Micron has repeatedly rewarded patient investors who ride out those boom-and-bust cycles with impressive long-term returns. Its stock declined about 40% this year as it faced the end of its current growth cycle, but it’s still nearly doubled over the past five years.

Will Micron’s stock replicate those gains over the next five years? Let’s evaluate its challenges and potential catalysts to find out.

Micron recovered from its previous cyclical slowdown throughout fiscal 2017 and fiscal 2018. But over the following two years, Micron and its industry peers produced too many chips as the market’s demand for consumer electronics — especially smartphones — slowed down. As a result, a supply glut occurred, memory prices tumbled, and Micron’s revenue declined year over year for six consecutive quarters through fiscal 2019 and fiscal 2020.

Predicting the next boom-and-bust cycle

Micron’s revenue rose 24% year over year to $24.1 billion in the first nine months of fiscal 2022, but it expects its revenue to decline 13% year over year in the fourth quarter and end its current growth cycle. The midpoint of its guidance implies its revenue will grow just 13% for the full year.

The bulls believe Micron will recover quickly as its data center, consumer electronics, industrial, and auto customers continue to install more memory chips to support advanced 5G, cloud, and AI features. It’s also been actively throttling its production to avoid flooding the market with cheap chips again, so this cyclical downturn might be less painful than the previous one.

The bears will argue that macroeconomic headwinds — especially inflation, rising interest rates, supply chain disruptions, and a potential recession — will make the next few years much more challenging for Micron. Even if Micron slams the brakes on its production, the macro headwinds could curb the market’s appetite for new chips and memory prices will tumble again.

For now, analysts expect Micron’s downturn to be shorter than the one it experienced in fiscal 2019 and fiscal 2020, but for its subsequent recovery to also be milder than its growth spurt in 2021.

These forecasts could be too optimistic. During Micron’s latest conference call, CFO Mark Murphy said the market’s “long-term demand trends remain constructive” but “select market weakness and macroeconomic uncertainty” would impact its “near-term outlook and visibility.”

But even if Micron’s slowdown drags on through fiscal 2024, its sales should eventually rebound. Therefore, investors should still expect Micron’s revenue to rise again in fiscal 2025 and fiscal 2026.

Where will Micron be in five years?

If Micron matches analysts’ expectations through fiscal 2024, then continues to grow its top line at an average rate of 15% over the following two years, it could generate $48 billion in revenue by fiscal 2026.

That would be more than 70% higher than its fiscal 2021 revenue, so it’s certainly possible for Micron’s stock to nearly double again over the next five years — but it definitely won’t be a smooth ride.